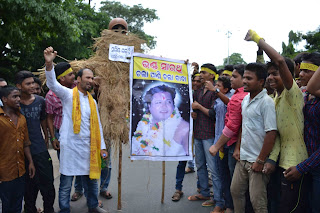 Bhubaneswar, August 9: Crime Branch sleuths on Sunday started
interrogation of the self-styled godman Srimad Sarathi at the CB headquarters
in Cuttack to extract truth from him about the ‘scandal’.

The CB has taken Sarathi on a three-day remand starting Sunday.

A team of CB sleuths started grilling of the controversial spiritual leader at around 1 pm and which
continued till late evening.
Source maintained that the
48-year-old man is being questioned in the presence of his chartered accountant
Gitiranjan Mekap. The Crime Branch team raided the house of Mekap late on
Saturday night in Kendrapara and seized a laptop, a computer hard disk and
several documents of the Baba.
Crime Branch ADG BK
Sharma had informed that the interrogation would mainly focus on the financial
transactions of Satyam Charitable Trust, formed by Sarathi Baba and alleged
fraudulent possession of land, money collected in the name of Satyam Charitable
Trust, his visit to Hyderabad, Jeypore and Kolkata and his involvement in
criminal activities.
Earlier in the day, the
CB team brought Sarathi Baba alias Santosh Raul from the Choudwar Circle Jail
amid tight security at 12 noon and entered the CB headquarters from its backside
to avoid public outrage.
As per norm, Baba stated
to be a diabetic patient was taken to the SCB Medical College and Hospital for
the mandatory medical check-up, sources added.
On Friday, the Crime
Branch, probing the Sarathi Baba scandal, seized Rs 2.28 lakh in cash, 15 kg
silver, 50 gram gold, around 55 kg of metallic coins with embossed picture of
the accused on them. Besides, property documents and two swords were also found
by the probe team.