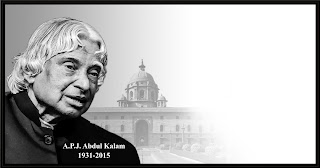 The covers are being
sent to the Post offices at Shillong, Rameswaram, Sriharikotta, Pokharan,
Chandipur and Rashtrapati Bhavan for special cancellations, as these were the
places which have associational significance with Kalam’s life. The set of six
covers with the cancellations would be available to philatelists by August end.
Mourning covers are
black bordered envelopes issued after the death of famous persons. It is a
Victorian tradition which was popular in India during the British rule.
Speaking on the
occasion, Anil Dhir, eminent philatelist, said that the Cover will be a fitting
tribute to the great man and his legacy. The issuance of the cover was his
brain child; the cover was designed by Kasinath Sahoo another philatelist of
eminence. Dhir holds the distinction of possessing the largest number of
mourning covers in the world. The collection showcases a wide variety of
letters about death, ranging from pre-stamp covers of 1790 to recent ones.
These include personal letters, postcards, official notices, funeral notices,
death telegrams; church memorial services letters, elegiac letters and
gravestone and coffin receipts. The Mourning Cover issued on the death of
Mahatma Gandhi fetched Rs 5.75 lakh in a recent auction.