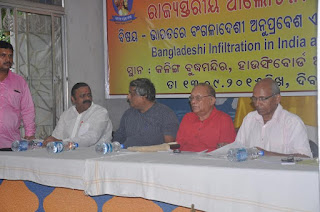 Bhubaneswar, September
13: The Bharat
Raksha Manch on Sunday said that it would release a White Paper on the extent
of Bangladeshi infiltration in the state.
Manch national secretary Anil Dhir said that a preliminary
survey of 72 urban places in the State had shown that in 54 towns and cities
there was a discernible, identifiable, prominent presence of illegal
Bangladeshi immigrants.
He said these infiltrators are engaged in nefarious
activities like smuggling, counterfeit currency, cattle trade, highway robbery,
temple theft etc.  The entire commercial
sex industry in the State in now under the control of these immigrants, added
Dhir.
The Manch held a  seminar
on  “Bangladeshi Infiltration in India
and Its Impact on Odisha”  which was inaugurated
by Sambad daily editor Soumya Ranjan Patnaik.
Speaking at the seminar, Dhir gave a detailed report of the
extent of the illegal infiltration of Bangladeshi migrants in the entire State.
He said that with its   485 kms coastline,
the longest in the country, Odisha is the most vulnerable State in the country
for landings. The five marine stations, set up after the 27/11 attacks, have a
zero record of nabbing any infiltrators since they were set up in 2009. In
spite of this, thirteen more Police Stations are being set up.  Dhir lamented that expensive inceptor boats,
coating crores of rupees, are lying unused. The few infiltrators that are
nabbed are by the Coast Guard.
Manch national co-convenor Murali Manohar Sharma elaborated
understanding of the ongoing National Citizens Register in Assam. He said that
this will help in identifying illegal immigrants and that this exercise should
be implemented in all the border states.
Manch national convenor Suryakant Kelkar gave a perspective
of the all India scenario.
Soumya Ranjan Patnaik said that the regional political
parties were in a big way responsible for encouraging this influx.  He lambasted that Indians have become
dependent of the cheap labour force of these illegal migrants.
“The laws need to be re-strengthened, the facilitators, who
help in this illegal immigration, would be heavily punished,” said Patnaik. Bimalendu
Mohanty also spoke.