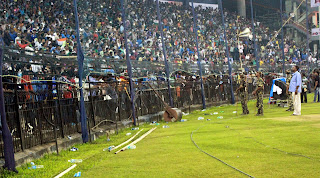 Bhubaneswar, October 6: Chief Minister Naveen
Patnaik on Tuesday ordered a probe over the unruly crowd behaviour during the
second T20 match between India and South Africa at Barabati Stadium in Cuttack
on Monday night, and cautioned Odisha Cricket Association (OCA) and Odisha
police to ensure no such incidents in future.
Expressing concern over incident at Barabati, Patnaik
had called an emergency meeting on Tuesday afternoon at the Secretariat to
discuss the incident in detail wherein OCA Secretary Ashirbad Behera, Chief Secretary GC Pati, Home
Secretary Asit Tripathy, DGP Sanjeev marik, Commissioner of Police Dr RP Sharma, Intelligence ADG Sunil Roy and other senior officials
participated.
Patnaik directed Home Secretary Asit Tripathy to
conduct a thorough probe into the incident and submit a report within a month.
Terming the unruly crowd behaviour as grossly
unfortunate OCA Secretary Ashirbad Behera said, “Some people are targeting the
OCA and Barabati and trying to defame it. This is the handiwork of them.”
Strongly reacting to the statements of some
cricketers, including cricket commentator Sunil Gavaskar, that Odisha should
not be allowed matches for next two years for the incident, Behera said, “The
statement of Gavaskar is not applicable at all. The match referee and observer
would submit their report to BCCI and later the BCCI would seek explanation
from us. Let’s wait for that.”
Behera argued that during a match in Kolkata spectators
had hurled bottles to the players from around the stadium and here out of total
45,000 visitors only 150-200 people hurled bottles.
Meanwhile, OCA president Ranjib Biswal on Tuesday also
described the unruly crowd behaviour as unfortunate and said the incident would definitely have a
negative impact as the people across the world must have watched it.
He said
the OCA would have a meeting with the Board of Control for Cricket in India
(BCCI) and the International Cricket Council (ICC) and tell them that this was
the only incident at the Barabati stadium.