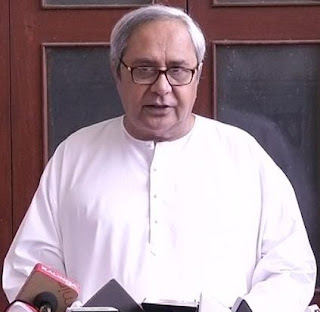 Bhubaneswar, July 27: Odisha Chief Minister Naveen
Patnaik on Wednesday termed the statement made by his Chhattisgarh counterpart Raman
Singh on Mahanadi water issue as “unfortunate” and asked him to stop all
constructions till the issue is resolved.
“The statement of Chief Minister, Chhatisgarh on
Mahanadi water issue yesterday is most unfortunate. It violates the cardinal
doctrine of inter-state river water sharing between co-basin States and our
federal governance. What is more unfortunate is the false and misleading
statement of Mr. Balyan, Minister of State, Water Resources on the floor of
Parliament yesterday. I have already taken up the Mahanadi issue with Hon’ble
Prime Minister seeking his intervention,” Patnaik told reporters here.
On Tuesday Singh told reporters in Raipur that his
Government will go ahead with the projects (dams and barrages in upstream of
Mahanadi) and nobody can prevent them from going ahead with the projects.
“I sincerely request the Chhatisgarh Government to
stop all constructions till the issue is resolved,” said Patnaik.
Maintaining that Mahanadi is the life line of Odisha,
Patnaik said, “We shall not allow Mahanadi to dry out because of the unilateral
and blatant actions of Chhatisgarh State.”
“I assure the people of the State that my Government
will take up the issue at various levels and leave no stone unturned to
establish our justifiable rights over the water of Mahanadi,” asserted Patnaik.