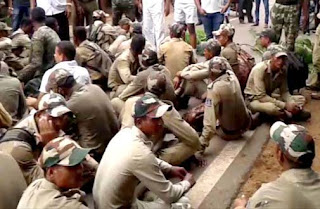 Bhubaneswar, Aug 1: Laxminarayan Pradhan, a jawan of
the Special Operation Group (SOG), died of during a practice run on the SOG
camp ground at Chandaka under Nandankanan police station on Monday morning.
Inspector General of Police (Operation) Soumendra
Pridarshi said Pradhan fainted during the regular practice run. After preliminary
treatment he was rushed to the Capital Hospital where doctors declared him
brought dead.
Following the incident the other SOG jawans staged a
demonstration by blocking road in front of the camp alleging that the victim
was not provided proper preliminary treatment while he fell unconscious on the
ground. The protestors further charged that the deceased was forced to run by
the authorities despite even after he complained of illness.
Refuting the
allegations of the jawans, Priyadarshi said the victim completed 10 km running before
the stipulated time.
“Then he suddenly fainted. He was immediately rushed
to the MI room at the camp for preliminary examination. Late he was shifted to
the Capital hospital where he was declared dead,” said Priyadarshi, adding that
it looks like a cardiac arrest.
However, a postmortem will be carried out and the exact
reason of the death will be ascertained, added Priyadarshi.
He said compensation will be provided to the family
of the deceased as per Government norms.