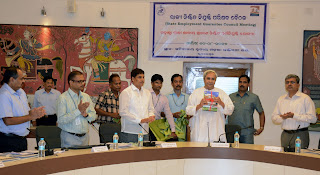 Bhubaneswar, Aug 19: Chief
Minister Naveen Patnaik on Friday expressed appreciation for generation of four
crore person days in four and half months, expenditure and creation of durable
assets under Mahatma Gandhi National Rural Employment Guarantee Scheme
(MGNREGS).
At State Employment
Guarantee Council meeting held at the State Secretariat under the chairmanship
of Patnaik it was revealed that in the first four and half months of current
fiscal, the State has already achieved four crore person days and spent over Rs
1,243 crore. At this rate, the annual target of eight crore person days for the
year will be surpassed. We have consistently surpassed the target. In the last
fiscal, 8.95 crore person days were generated at a cost of Rs 2,074 crore
against a target of 7.60 crore person days.
“Panchayati Raj
Department has spearheaded successful implementation of MGNREGS with novel initiatives
like Intensive Participatory Planning Exercise for decision making, budget and
livelihood planning at Gram Panchayat level. Implementation of Ne-FMS from 1
April 2016, has ensured direct transfer of wages to beneficiary accounts,” said
Patnaik.
“To address distress
migration, 150 days of employment has been ensured in all blocks of Nuapada
district and six blocks of Bolangir from 2013-14 to 2015-16. The State
Government is bearing the cost of additional 50 days in these districts.
Similarly, for drought mitigation, the State Government has provided additional
50 days of work, over and above 150 days of employment and additional 30% wages
to workers in drought affected blocks from State’s own funds,” added Patnaik.
MGNREGS has been used
extensively in drought mitigation efforts like creation of water harvesting
structures and conservation of existing water bodies. Convergence of the scheme
has led to creation of durable assets including rural housing, construction of
playgrounds in every Panchayat, plantations, and as many as 1,155 Angwanwadi
centres.
Cooperation amongst
stakeholders and effective action from all is critical for the success of
MGNREGS and must complement the efforts of the Government.