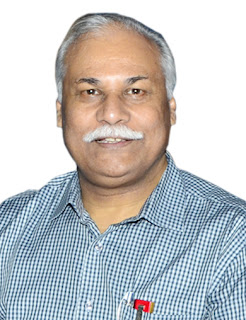 Bhubaneswar, Aug 25:  1979-batch Indian Railway Store Service (IRTS)
officer Umesh Singh has taken over charge of General Manager of the East Coast
Railway (ECoR). Earlier, he was holding the post of Additional Member (Railway
Stores) at the Railway Board, New Delhi.
A graduate in Mechanical Engineering, Singh also holds a
Masters Degree in Business Administration from the Southern Cross University,
Australia. He started his career in 1981.
In his earlier stint as Controller of Stores, ECoR, Singh has
been instrumental in optimising the performance standards in both material
management and sales management. His innovative ideas led to obtain the most
competitive rates for purchasing various materials with absolute transparency.
Singh is credited with introducing the Google mapping system
with photographs to enable the bidders of scrap purchase in transparent manner.
This has opened up opportunities to a large number of scrap purchasers
globally. He introduced a new system of procurement called “Reverse Auction
Mode”, which has helped the Indian Railways obtain the most competitive rate
for purchasing various materials with utmost transparency.

5 dacoits held while planning for crime in city