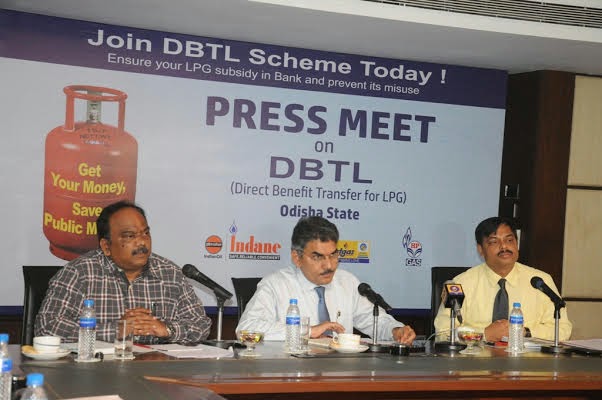 Bhubaneswar, November
26: For the better convenience of lakhs of households, the modified direct
benefit transfer of LPG (DBTL) scheme will be re-launched in Odisha from
January 1 next year along with other many States in the country in the second
phase.
Earlier in the first
phase the Central government has launched the modified (DBTL) scheme in 54
districts in 11 States November 15, 2014 whereby LPG consumers who have not yet
availed the benefit will be able to get cash subsidy amount transferred into
their accounts to buy Liquefied Petroleum Gas (LPG) cylinders at market price.
Under the scheme, LPG
consumers will get cash subsidy in their bank accounts so they can buy a
cooking gas cylinder at market price.
Cash equivalent to the
difference between the current subsidised rate and the market price is
transferred to the bank account of a consumer the moment he or she makes the
first booking for a cylinder after joining the scheme.
After the consumer
takes delivery of the cylinder, another advance cash subsidy is transferred to
the bank account.
“Consumers who had
joined the scheme earlier and had received cash subsidy in their bank accounts
do not need to do anything further. To confirm this, they should check their
CTC (cash transfer compliant) status on www.MyLPG.In,”
DBTL State level coordinator-cum-IndianOil State unit General Manager KK Sharma
told mediapersons here on Wednesday.
Consumers who do not
have Aadhaar number can receive cash directly in their bank account without
producing Aadhaar. “However, as and when they get Aadhaar they may have to
shift to Aadhaar based cash transfer,” said Sharma.
Sharma added that consumers
who are not CTC will get a three month grace period during which they will
receive the cylinders at subsidised rate. After the grace period, they will get
an additional period of three month as parking period. During the parking
period they will have to buy cylinders at the market rate. If the consumer
joins the scheme within the parking period, the subsidy as per entitlement and
consumption during parking period will be transferred to his bank account.
As per modification the
subsidy per domestic subsidised cylinder shall be fixed.
LPG consumers who will
now join the modified scheme in future will get a permanent advance towards the
purchase of the first market priced cylinder equal to the fixed subsidy per
cylinder.
All LPG consumers who
had already joined the scheme solely based on Aadhaar number will start getting
subsidy in their Aadhaar linked bank accounts after scheme is launched.
IndianOil State unit
Chief Area Manager KK Mishra said there are 28 lakh LPG consumers and said massive
awareness programmes will be undertaken across the State to sensitise people on
the issue.
Earlier, the DBTL
scheme had launched in seven districts like Baleswar, Bhadrak, Sundargarh,
Khordha, Cuttack, Balangir and Puri in the State.