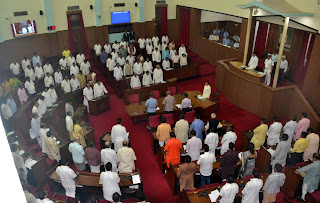 Bhubaneswar,
Sep 1: Odisha Legislative Assembly on Thursday ratified the Goods and Services
Tax (GST) Constitutional Amendment Bill passed by the Parliament, at a special
one-day session.
The proposal
was passed unanimously by the House, making Odisha the sixteenth State to
ratify the GST bill, billed as the biggest tax reform since Independence.
The Bill was
first cleared by BJP-ruled Assam on August 12, followed by Bihar, Jharkhand,
Chhattisgarh, Gujarat, Himachal Pradesh, Madhya Pradesh, Delhi, Nagaland,
Maharashtra, Haryana, Sikkim, Mizoram, Telangana and Goa.
After an
obituary reference, Chief Minister Naveen Patnaik, who tabled the resolution to
ratify the Bill said, “The Goods and Services Tax will bring about
comprehensive reform in the indirect tax regime across the country. General consumers,
businessmen and industries will gain from the GST system.”
The Bill was
passed following three hours of discussion.
Patnaik,
however, informed the House that the State Government would separately request
the Centre to consider its concern over imposition of green tax on polluting
goods in addition to the GST and take appropriate steps for Central Sales Tax
compensation to the State up to the day the GST is adopted.
Leader of
Opposition Narasingha Mishra, BJD members Bed Prakash Agrawala and Amar Prasad
Satpathy, BJP leader KV Singh Deo and Congress MLAs Prafulla Majhi and Naba Das
participated in the discussion, among others.
They all
hailed the Bill as a landmark tax reform move and supported the resolution.
The Chief
Minister thanked the members of all the parties for supporting the resolution.
After the
Bill was passed, Speaker Niranjan Pujari adjourned the House sine die.

Ahead of by-poll, CM dedicates a slew of infra projects in Bargarh