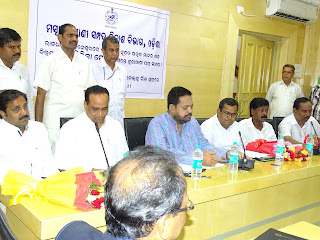 Bhubaneswar,
Sep 2: FISHFED, Odisha’s apex fisheries cooperative organisation, on Friday
signed an agreement with the Falcon Marine Exports Limited to set up 26 Chilika
Fresh kiosks in Bhubaneswar on a public private partnership (PPP) mode.
As per the
agreement, FISHFED will get a rent of Rs 61.92 lakh in the first year, which
will increase at the rate of six percent per annum for a period of 15 years.
Chilika
Fresh is a concept promoted by Fisheries and Animal Resource Development
Department to make available fish and fish products to the consumers in the
most hygienic conditions. It is also a unique initiative to establish a direct
linkage of the consumers with the primary fishermen.
The first
outlet of Chilika Fresh was inaugurated by Chief Minister Naveen Patnaik at
Siripur Square near OUAT on September 26, 2014. Later on, another outlet was
opened at CRP Square.
Freshwater
fish like Rohu, Catla, Mrigal, other Minor Carps, marine fish like Hilsha,
Pomfrets, Mackerel, Bhetki (Sea-bass), Khainga (Mullets), Prawn and crabs are
available at an affordable price in the two Chilika Fresh outlets.
Keeping in
view the tremendous response of the urban consumers to the outlets, it was
decided to open more such outlets in Bhubaneswar and various parts of the
States.