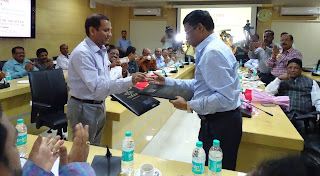 Bhubaneswar, Sep 2:
The Fisheries Department on Friday signed a lease agreement with the Falcon
Marine Exports Limited which will manage three clusters having a gross water
area of 433 hectare of Jagatajore-Banapada Shrimp Culture Project in Kendrapara
district.
The clusters
comprise 437 culture ponds with a water spread area of 257 hectares. The State
Government will get revenue of Rs.13 crore – over Rs 82 lakh in the first year
itself – from Falcon Marine for the lease period of 15 years.
It is
expected that about 2500 MT of L.vannamei shrimp worth over Rs.87 crore will be
produced annually. Most of it will be meant for export. The project will
generate employment and interest among the farmers of the area for better aquaculture
practices.
Jagatjore–Banapada
Shrimp Culture Project was implemented in the year 1992-93 in Mahakalpada
Tahasil of Kendrapara District. The project was executed by the State Fisheries
Department with loan assistance of Rs 25.23 crore from from World Bank.
The project
was completed in the year 2000. In the project, 405 ponds, each having 0.5
hectare water area, were allotted to 405 beneficiaries of lower income group
and 76 large ponds, each having one hectare area, were allotted to 11 of
entrepreneurs.
Shrimp
culture was taken up in the year 2001 and Rs 81.00 lakh were provided to the
BPL beneficiaries as working capital. Only one crop was partially successful
and after that the project became defunct. The entrepreneurs and the farmers
sustained heavy losses and did not refund their sub-loan and the leases were
cancelled.
Several
suggestions were received from the Seafood Exporters’ Association for making
use of the infrastructure developed under the project.
In the
meeting held under the chairmanship of the Chief Minister in 2004, it was
decided to sell out the project and a consultant was engaged for valuation of
the assets. Subsequently, it was decided to go for long term lease of the
project instead of outright sale.
The lease
process was finalized by the Directorate of Fisheries with Falcon Marine
Exports as per the decision after it became the highest bidder.
Odisha is
the first State of the country to have adopted a comprehensive fishery policy
in 2015 with an aim to double the fish production and achieve export earnings
of Rs 10,000 crore within the next five years.
Besides, the
State Government has notified the Brackish Water Land Leasing Policy to make
available about 24,000 hectare of land in coastal area for brackish water
aquaculture with an aim to change the economy of coastal area.