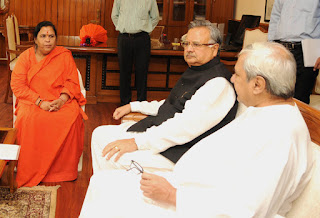 Bhubaneswar, Sep 17: As the tripartite meeting on Mahanadi water sharing dispute
failed to make any headway on Saturday, Odisha Government is seriously
contemplating to move the Supreme Court for establishment of a Tribunal under
the Inter-State Water Dispute Act 1956 for interest of Odisha.
Even as Union Water Resources Minister Uma Bharti, who chaired the
meeting involving Odisha Chief Minister Naveen Patnaik and his Chhattisgarh counterpart
Raman Singh, announced to form an technical committee within a week to examine
the contentions of Odisha and Chhattisgarh and impacts of the projects being
undertaken by them, Patnaik said Odisha will explore all options, including the
legal fight.
“We will explore all options. We will leave no stone unturned to protect
the interests of Odisha. That would certainly include the legal option of
approaching the Apex Court for setting up of Tribunal under Interstate Water
Dispute Act 1956. The serious environment threats posed by these projects will
be decisively challenged in all suitable Forums including National Green
Tribunal (NGT),” said Patnaik.
However, no
early solution to the issue in Odisha’s favour is in sight as was evident from
the outcome of the meeting in New Delhi on Saturday as the Centre-brokered
meeting in effect was a failure.

There was no
reference to the Odisha Government’s main demand for immediate stoppage of the
construction of the barrages on the Mahanadi in Chhattisgarh at the
meeting.
Patnaik told
reporters after meeting that his proposal of forming an Expert Committee to
look into the Mahanadi issue was not accepted by them (the Chhattisgarh Government).
“About 65
per cent of our population is dependent on Mahanadi. The river provides a huge
ecological balance to our otherwise disaster-prone State. I proposed strongly
to stop construction barrages upstream Mahanadi for some time and to form an Expert
Committee to look into issue. But they didn’t accept the proposal. I have
convened a State Cabinet meeting tomorrow to take further decision,” Patnaik said.
He said
biodiversity hotspots of Chilka lake, Bhitarkanika, Satkosia and Gahirmata
would be impacted if free flow of water in Mahanadi is disturbed.
What Bharti told
the media after the meeting amounted to blaming the Naveen Patnaik Government
for its much-belated reactions to the Chhattisgarh’s barrage projects.
“Some of the
constructions began way back in 2006. Odisha brought it to our notice in June/
July. The Centre needs some time to address the issue even though it doesn’t
have a direct role to play in it. However, I would still like to assure that we
won’t let injustice be done to either of the States,” said Bharti.
And
Chhattisgarh Chief Minister Raman Singh said there is no point in Patnaik’s
demand to stop barrage works as their construction is almost complete.
While
Patnaik sought stoppage of all construction works by Chhattisgarh, an
independent fact-finding committee by the Centre and review of clearances given
to the projects by the Union Ministry of Environment and Forests, his
Chhattisgarh counterpart Singh justified that the projects in no way would
affect Odisha’s interests and hence there is no need of stopping of project.
“We are
using only 15 per cent water while 57 per cent goes down to the sea. The water
flowing from Chhattisgarh can fill up five reservoirs of the size of Hirakud. I
don’t see any reason for a controversy after this,” maintained Singh.
She made it
clear that there are no master plans received by the CWC (Central Water
Commission) from Chhattisgarh on the constructions and sought more time to
address the dispute.