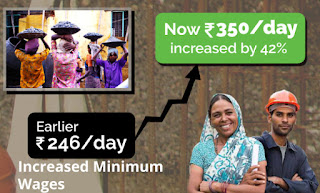 Bhubaneswar, Sep 19: A two-day national conference on labour
will begin in the city on Tuesday.
The conference being organised by the Odisha
Government in association with International Labour Organization (ILO) will be
inaugurated by Chief Minister Naveen Patnaik in the presence of Union Labour
and Employment Minister Bandaru Dattatreya.
The event which will be organised at Mayfair Resorts here
will be attended by Labour Ministers of all the States, Secretaries, Labour
Commissioners, Chairmen of Labour Boards. They will participate in the
discussions.
Odisha Labour and ESI Principal Secretary G Srininvas said
the participants discussion will be held on child labour, migrant and bonded
labour issues. The conference will chalk out strategy during the discussions in
the conference, added Srininvas.
Union Secretary Labour and Employment Shankar Aggarwal,
Odisha Chief Secretary Aditya Prasad Padhi, ILO India Director Panudda Boonpala
will grace the inaugural session too.
Major and some burning issues, including skill development
of labour forces, child labour prohibition and steps to be taken in the light
of new Child Labour Act will be discussed in the technical session.