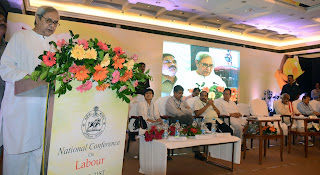 Bhubaneswar,
Sep 20: Chief Minister Naveen Patnaik on Tuesday said that the State Government
commits itself to the cause of elimination of child labour in all forms by 2025
in Odisha.
“Odisha has
formulated the State Action Plan for Elimination of Child Labour to stop child
labour practice. It focuses on rescue, rehabilitation, education
and skill development of the rescued minors and action against the offending
employers. The State commits itself to the cause of elimination of child labour
in all forms by 2025 and I assure suitable budgetary outlays for this,” said
Patnaik while addressing at the inaugural function of two-day national
conference on labour here.
Patnaik said
to ensure that the entitlements of the workers after migration, my Government
has taken recent decision to set up Odisha Help Desks in the five States namely
Karnataka, Tamilnadu, Andhra Pradesh, Telengana and Delhi. I look forward to a
positive engagement with these States through the help desks which are the
first point of contact for Odia migrant workers.
He informed
that around 16 lakh workers have already been identified and registered under
the Odisha Building and Other Construction Workers Welfare Board (OB&OCWB) and
have received benefits worth Rs 175 crore.
“I expect
that more than 25 lakh workers will be duly registered by the end of this
financial year. I would like to inform you that Odisha has spent Rs 200 crores
against 1000 crore for welfare of the construction workers and we plan to cross
Rs 500 crore this year. The performance of Odisha is one of the best in the
last two years in terms of expenditure,” added the Chief Minister.
Addressing
the conclave, Union Labour and Employment said his Ministry has recently taken
several initiatives for the benefit of labourers like extending maternity
holiday week from 12 weeks to 26 weeks and a hike in the minimum daily wage of
unskilled labourers working in agriculture sector from Rs 160 to Rs 350.
The
conference, attended by Ministers and Chairpersons of Labour Welfare Boards of
29 States, would conclude on Wednesday.
State
Minister for Labour and ESI Prafulla Kumar Mallick, OB & OCWWB Chairman
Subas Singh, Chief Secretary Aditya Prasad Padhi, Union Labour Employment
Secretary Shankar Agarwal among many other attended the event.