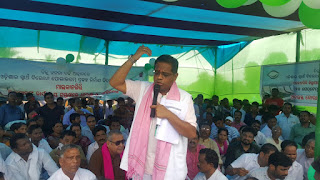 Bhubaneswar,
Sep 20: Former
Chhattisgarh Chief Minister Ajit Jogi’s son Amit Jogi on Tuesday participated
in Odisha’s ruling BJD-sponsored agitation in Malkangiri district against the
Polavaram project of Andhra Pradesh and targeted the BJP and Congress for the
controversial project.
The
Chhattisgarh Janata Congress (Jogi) (CJCJ) leader along with Dharamjit Singh undertook
a bus yatra from Jagdalpur in Bastar district of Chhattisgarh to Malkangiri
here, and protested against the construction of the Polavaram project in Andhra
Pradesh.
He joined
the senior BJD leader and Housing and Urban Development Minister Pushpendra
Singhdeo and Malkangiri MLA Manas Madkami-led protest rally near Malkangiri
Collectorate against the controversial project. 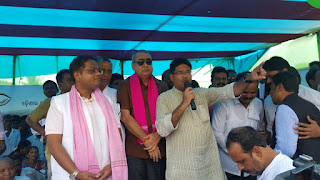 He said that
firstly, Telangana Rashtra Samithi and now Biju Janata Dal, the Chhattisgarh
Janata Congress (Jogi) (CJCJ) will unitedly protect the interests of all the
three States in the region to be affected by the project in AP.
“Whether in
Bastar or in Odisha, the land where innocent tribal people live is equivalent
to my mother land. I vow not to let an inch of this land sink under Polavaram
project,” said junior Jogi.
CJCJ formed by Ajit Jogi is
demanding that public hearing must be held in the affected regions at the
earliest, and also conduct a joint survey to analyse the environmental and
social impact the proposed project will cause.
He also
attacked the Narendra Modi Government for facilitating construction of the
project.