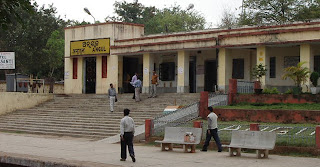 Bhubaneswar,
Sep 20: To improve passengers’ amenities the East Coast Railway (ECoR) has
decided to install digital Train Indication Boards (TIBs) and Coach Indication
Boards (CIBs) thereby facilitating commuters to know about the information like
arrival/departure of trains.
Presently,
commuters become aware of the train position only after arriving on the
platform.
The work for
provision of TIB and coach Indication boards at Angul railway station has been
sanctioned and the work is likely to be done by March 2017.
At present, manual
public address system is available at Angul station and auto-announcement system
will be provided soon after the installation of CIBs and TIBs.
Separate upper
class waiting rooms both for gents and ladies are available at Angul railway station.
Several facilities like extension of platforms, provision of platform sheds, lighting
facilities at stations, parking place and circulating areas have also been
provided to facilitate the passengers at Angul railway station.

Odisha AAP to enorl 1L youth to its fold