Skip to content
Bhubaneswar,
Sep 20: The Monsoon Session of the Odisha Legislative Assembly beginning here
tomorrow is likely to be a stormy affair with opposition Congress and BJP geared
up to put the ruling BJD in the dock on a host of issues, including Mahanadi
dispute, Nagada malnutrition deaths, civilians killing by police in Kandhamal. 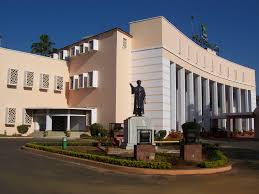 Besides, the
reports of BJD MLAs demanding bribe for establishment of industries and Dana
Majhi carrying his wife’s dead body on shoulders for 12 km after being denied
ambulance by authorities are likely to be raised by the opposition parties.
On the other
hand, the ruling BJD would make the Polavaram project and the construction of
barrages upstream the Mahanadi in BJP-ruled Chhattisgarh as main issues.
Both
opposition Congress and ruling BJD have summoned separate party Legislature
Party meetings to fine tune the strategies on Tuesday.
Notably, the
BJP Legislature Party meeting was held a few days ago.
“We will take up serious issues, including
Mahanadi and Polavaram, on the floor of the House. Besides, cutting of Central
assistances in crucial schemes will also be raised,” Chief Minister Naveen
Patnaik told reporters after the BJDLP meeting.
Leader of
Opposition Narasinga Mishra said his party Congress would make the Mahanadi
water sharing dispute as the major issue among mnay others.
According to
the schedule of the Assembly Secretariat, the session would have eight working
days and conclude on September 29.
Parliament
Affairs Minister Bikram Keshari Arukh told reporters that as many as 12
important Bills are scheduled to be discussed and passed during the session.