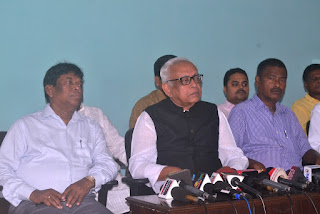 Bhubaneswar, Sep 25: A day after Chief Minister Naveen
Patnaik blasted opposition parties, the Congress and the BJP, saying they are
shedding crocodile tears on Mahanadi issue, Leader of Opposition and senior Congress
leader Narasingha Mishra on Sunday severely criticised Patnaik for surpassing
facts on Mahanadi in the House and termed him as a “villain”.
He also targeted Patnaik for not answering questions posed by
MLAs during the two-day discussion on the Mahanadi issue in the State Assembly.
“The statement made by the Chief Minister in the House
yesterday vis-a-vis the Mahanadi issue is unfortunate. He made the statement
not as a Chief Minister but as the BJD head. He turned out to be a villain,”
Mishra told reporters here.
He said almost all the members belonging to both Opposition
Congress and BJP and ruling BJD expressed their views for a united effort to
prevent the unilateral and illegal act of the Chhattisgarh Government in
obstructing the flow of water to the Hirakud Dam and downward. But the Chief
Minister ignored the views, saying he would fight alone for the protection of
Mahanadi.
“Ignoring the views, he ignored the voice of the people for a
united fight. This speaks of the dictatorial attitude of the Chief Minister,”
he alleged.
In 2001 when the NDA was in power at the Centre and the BJD a
member of it, the Chief Minister had told the State Assembly that he would not
allow the Chhattisgarh Government going ahead with construction of barrages
upstream the Mahanadi. Why he could not keep his promise even after 15 long
years! He should tender an apology for his failure. Then only people can rely
on his present promise, said Mishra.
Mishra recalled that while the Chief Minister had failed to
protect the interest of the State vis-a-vis the issue of the Kolkata Port
boundary extension to Odisha border, the interest of the State was protected by
the Congress through filing a PIL in the Orissa High Court. He too criticised
him for not being able to find out a way in the Polavaram project case in nine
years.
He demanded that the Chief Minister make public the plans and
efforts his Government is going to take to protect interest of the State on the
Mahanadi issue.