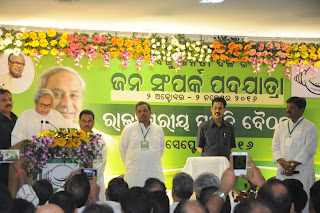 Bhubaneswar, Sep 25: BJD
supremo and Chief Minister Naveen Patnaik on Sunday said the apathy of the
successive Governments at the Centre towards Odisha is the main barrier in the
State’s development.
“Like natural
calamities, the Centre’s apathy is the main barrier in development of Odisha. Anti-Odisha
tendency of the Centre was evident from Mahanadi and Polavaram issues. It is
clear that the Centre is neglecting Odisha,” said Patnaik while taking stock of
the preparations of the party’s Janasampark Yatra scheduled to being from
October 2, on the occasion of Gandhi Jayanti.
Asking party cadres to
reach out to people and convince them about the Centre’s negligence towards the
State and at the same time to highlight the State Government’s welfare measures
during the month-long public contact drive, Patnaik said efforts are on for
welfare of people of every sections and regions in the State.
He charged that holding
assistances in eight Government schemes, supplying wheat instead of rice to
Odisha under the NFSA and making Aadhaar Card compulsory for SC/ST students are
some of the anti-federal attitude of the Centre.
“Interest of their
parties (Congress and BJP) is more important than the interest of people. We
will continue to fight in Mahanadi and Polavaram issues.  We will make people aware of Central
negligence and State Government’s pro-people schemes, ” said Patnaik.
He highlighted some
welfare schemes initiated by his Government for students and girls, like the Kaling
Sikshathri Yojana and the Biju Kanya Ratna Yojana.
Claiming that his door
is open round the clock, the Chief Minister asked the party leaders to bring to
his notice the problems faced by people during the party’s public contact
drive.
Jansampark Yatra chief
convenor and MLA Pratap Jena and almost all Ministers, MPs and MLAs were
present in the preparatory meeting.

Dos and don’ts after flood