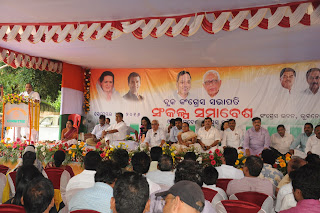 Bhubaneswar, Sep 25: With panchayat elections less than six
months away in Odisha, the Congress on Sunday decided to visit every house in
the State against the ruling BJD dispensation and opposition BJP to seek public
support.
Odisha Pradesh Congress Committee (OPCC) president Prasad
Harichandan, who convened a meeting of party block chiefs titled Sankalp
Samavesh, also sought to instil a sense of belief among the party’s block-level
cadres that the party can give a tough challenge to anti-poor and anti-farmer
ruling BJD and BJP.
Harichandan after the meeting told reporters here that the
party would redouble its efforts to reach out to people at a time when the BJD
Government is following an ‘anti-farmer’, ‘anti-tribal’ and ‘anti-dalit’
policy.
Describing his party’s plan and programme, Harichandan said
the party would prepare an election manifesto over local issues, for which a
Pradesh Panchayat Election Committee and a Manifesto Committee have already
been formed.
He said 30 senior leaders have been appointed as observers
for 30 districts to supervise the election process.
Informing that the Congress may go in for seat-sharing in the
panchayat polls with likeminded parties, Harichandan said the party would field
its own candidates in all 854 Zilla Parishad seats.
He said party leaders and workers would visit every house
across the State to seek their support against the scam-tainted BJD Government
and also against the BJP for neglecting Odisha.
Harichandan said booth committees would be formed in all
87,000 booths and observers would be appointed for the 314 blocks to facilitate
smooth victory of the party.
Party State in-charge BK Hariprasad was also present at the
news conference.