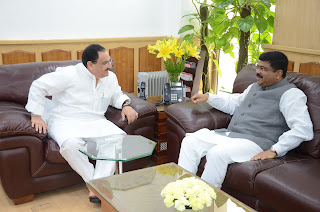 Bhubaneswar, Oct 6: Concerned
over the rising death toll due to the deadly Japanese Encephalitis (JE) in
Malkangiri district, senior BJP leader and Union Petroleum and Natural Gas
Minister Dharmendra Pradhan on Thursday met Union Health Minister JP Nadda in
New Delhi and sought his immediate intervention to tackle the situation.
“The disease has
assumed epidemic proportions and has claimed lives of more than 30 infants. The
deaths have been reported from Malkangiri district of Odisha which is an
under-developed district afflicted with Left Wing Extremism. The district fares
poorly on all socio-economic indicators,” said Pradhan.
Therefore, it is
necessary that the Government of India extends all possible support for
identifying the causes of the disease and advise the State Government regarding
effective steps for combating the clinical fallout of its spread and for
preventing mortality associated therewith, said Pradhan.
“This will prevent the
spread of the disease to neighbouring districts. A high level fact finding team
should be sent to investigate the causes for the outbreak of the disease and
also advise remedial measures for containing its fallout,” said Pradhan.
Nadda too assured all
possible supports to Odisha to contain the situation.