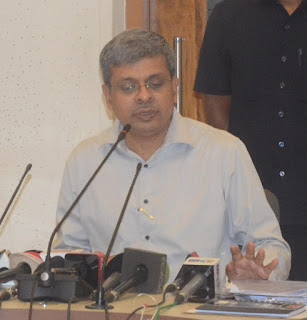 Bhubaneswar, Oct 7: The
current financial year’s total State Plan budget utilisation by September-end
has crossed Rs 19,000 crore, thereby marking a growth of 26 per cent more than
that of the corresponding period of FY 2015-16.
This was revealed at
an all-Secretaries’ meeting held under the chairmanship of Chief Secretary
Aditya Prasad Padhi at the State Secretariat on Friday.
The Chief Secretary
advised the departments to revisit the targets set by them and, accordingly,
align their action plans. Development Commissioner R Balakrishnan advised the
revenue-earning departments to take proactive measures for augmenting revenue
collection to support the higher plan expenditure.
The Principal
Secretaries and Secretaries were also advised to scale up work culture in their
departments and make best utilisation of the new young human resources who have
joined the Odisha Secretariat Service cadre recently. Notably, during last
three months 940 youths have joined as ASOs in the Secretariat. They have come
from various professional backgrounds like engineering, IT, MBA, personnel
management, industrial relations, rural development. The Chief Secretary wanted
utilisation of their talents in best possible manner through proper motivation
and training.
The State Plan
expenditure during FY 2016-17 up to September is Rs 19,087crore, which is 42
per cent. The plan budget utilisation in agriculture and allied sectors has is
Rs 4,837 crore up to September which is 44 per cent of the budget
estimate.
The utilisation in the
infrastructure sector has gone up to 51 per cent against the spending of 41 per
cent during last financial year. The expenditure in this sector has touched Rs
5,734 crore. The social sector spending followed the same pattern with
utilisation crossing Rs 7,568 crore against an expenditure of Rs 6,648 crore
during the same period of last fiscal.
The revenue collection
from both the own tax and nontax sources has also reached Rs 1,2812 crore. The
departments were advised to give their realistic requirements for the
Supplementary Budget by October 25.