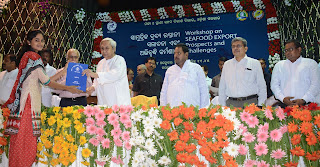 Rs
5,000 aid per annum to fishermen during fishing ban
Bhubaneswar,
Oct 14: Odisha has aimed to increase its sea food exports to Rs 20,000 crore
from the State per annum in the next five years, said Chief Minister Naveen
Patnaik while speaking at a workshop on ‘Seafood Export: Prospects and
Challenges’ here on Friday.
Organised
by the Fisheries and Animal Resource Department (F&ARD), the workshop
focused on the rapidly growing fisheries sector in the state and huge scope for
sea food export.
It
was revealed in the workshop that a total of 34,767 MT marine products worth Rs
2,069 crore was exported from the State in 2014-15, which is a growth of 450
per cent over export of Rs 379 crore in 2000-01.
The
FARD Department has a vision to increase the exports to Rs.20,000  crore per annum in the next five years.
Odisha
is one of the major maritime states, offering vast scope for development of
inland, brackish water and marine fisheries.
The
State’s 480 km long coastline with 24,000 sq km area within the continental
shelf has ample potential for marine fisheries development.
Freshwater
resources of the State are estimated to be 6.76 lakh hectares (ha) comprising
1.25 lakh ha of tanks/ ponds, 2 lakh ha of reservoirs, 1.80 lakh ha of lakes,
swamps and bheels and 1.71 lakh ha of rivers and canals.
The
State’s brackish water resources cover 4.18 lakh ha – 0.79 lakh ha of Chilika
Lake, 2.98 lakh ha of estuaries, 32,587 ha of brackish water area and 8,100 ha
of backwaters.
The
State has 24,031 ha of suitable brackish water government land which can be
utilized for L. Vannamei culture.
L.
Vannamei has high potential for export and the State Government plans to
provide suitable land for brackish water aquaculture to beneficiaries of
anti-poverty programmes-persons under BPL category, fishermen by profession or
by caste, landless persons, marginal farmers, educated unemployed persons,
self-help groups, primary fisheries cooperative societies, women cooperatives –
who are eligible for up to 5 ha land.
Partnership
farms, technical entrepreneurs, state owned corporations and exporters are
entitled up to 10 ha and even more.
The
Brackish Water Land Leasing Principles are in place and there is provision for
giving preference to the existing farmers, technically qualified persons and
trained as well as experienced persons.
By
harnessing the brackish water resources through leasing, the department has
plans to enhance shrimp production to 3 lakh MT in next five years.
To
cope up with the increased production, infrastructures like ice plant,
processing plant, refrigerated transportation vehicle, laboratories, equipment
and machineries for culture activities, feed plant, road network, electric
connectivity to clusters will be required in addition to road connectivity to
shrimp clusters.
The
Jagatjore-Banpada Shrimp Culture project has been leased out to a private
company for taking up Vannamei culture extensively. This will also help in
increasing the export and employment generation.
The
department has recently entered into a technical collaboration with World Fish
to adopt best management practices for increasing productivity in the existing
water bodies.
The
state has a target to double the fish production in the next five years and as
the pioneer State in the country, it has already notified Odisha Fisheries
Policy, 2015.
To
achieve this goal, the State Government is taking steps to induct the required
manpower. At least 123 posts of Assistant Fisheries Officers and 112 posts of
Junior Fisheries Technical Assistants have already been filled up.
On
the occasion the Chief Minister also launched a new State Plan Scheme,
“Livelihood Support to Marine Fishermen During Fishing Ban Periods.”
To
be operational from the financial year 2016-17, the scheme is intended to
provide financial assistance to poor marine fishermen and fish workers
adversely affected due to ban on account of sea turtle protection and marine
fisheries resources conservation. Such assistance is aimed to strengthen the
livelihood support of fisherman.
This
assistance would be in addition to the support available under the
Saving-cum-Relief Scheme of the Central Government, which is quite inadequate.
For
the Livelihood Support to Marine Fishermen During Fishing Ban Periods during
2016-17, 2000 most vulnerable BPL families will be selected by the Director of
Fisheries in the most transparent manner in the Olive Ridley Turtle
Conservation area.
The
affected fishermen will each receive an amount of Rs 5,000 per annum. After assessing the success of the scheme,
steps will be taken to extend it for further four years.