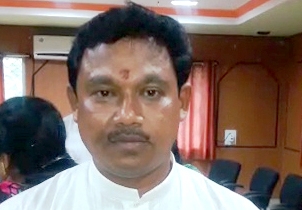 Dhenkanal, Oct 13: With only four BJP councillors out of the
total of 23, the saffron party on Thursday claimed the Dhenkanal Municipality
Chairman post after party candidate Sudhanshu Dalei was elected through lottery
after the voting ended in a tie.
On August 1, Indramani Behera of BJD who was the Chairman of
the civic body, however, lost a Congress sponsored no-confidence motion brought
against him and subsequently the Municipality had gone under the control of the
Dhenkanal Collector-cum-District Magistrate.
Surprisingly, he too had been elected with just eight BJD
councilors where as the majority mark stood 12.
Out of the 23 councillor, 18 were present on Thursday’s
voting. Dalei and his rival Independent candidate Rudranta Dalei got nine votes
each, resulting in a tie.
Eleven councillors from the Congress, five from the BJP and
one out of six BJD councillors were present during the voting.
Following an Orissa High Court order, the State Election
Commission decided to conduct the by-election.
On the other hand, in a major setback to the Congress, eight
out of the 11 party councillors resigned from the party.