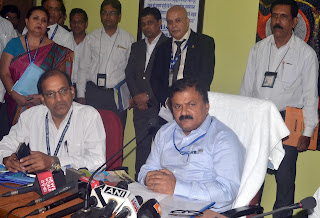 Bhubaneswar, Nov 8: The Jharsuguda Airport will be made
operational as the second commercial airport of Odisha by May 2018, said Airports
Authority of India (AAI) Chairman Dr Guruprasad Mohapatra.
“Initially, there were problems in the smooth conduct of work
due to land acquisition. But now the problem has been sorted out and work is
going on smoothly. We are expecting that by April and May, 2018, the Jharsugguda
Airport will be fully functional and declared as an operational airport,” said
Mohapatra during an interaction with media persons here.
He said the AAI has undertaken development of the Jharsuguda
Airport at a total project cost of Rs 200 crore for improving regional
connectivity within Odisha as part of the Regional Connectivity Scheme of the
revised National Civil Aviation Policy 2016 of the Union Government.
Under this project, a new modular design passenger terminal
with a handling capacity of 300 passengers, including 150 for arrival and 150
for departure, is under construction. Strengthening of runway, taxiway, new
technical block, control tower, fire station, staff quarters and all CNS
installations are also taken up, said Mohapatra.
“The runway will be capable to handle aircrafts up to Air
Bus-A320. The Odisha Government has extended financial support of Rs 75 crore
and land,” informed Mohapatra.

Withdrawal of cases against barred NFSA beneficiaries by Sep 25