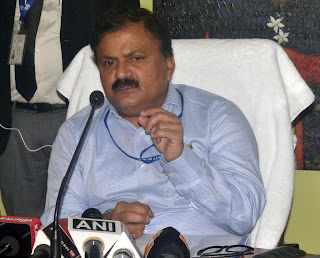 Bhubaneswar, Nov 8: Airports Authority of India (AAI) Chairman
Dr Guruprasad Mohapatra on Tuesday informed that the AAI will spend Rs 2,500
crore in the next two-three years for its proposed land-side development project
at the Biju Patnaik International Airport (BPIA) here thereby providing
employment facilities to nearly 85,000 persons.
He said the AAI has also decided to make the harsuguda
airport fully functional as a commercial one by May 2018.
“The AAI has identified nearly 60 acres of land for the proposed
land-side development to facilitate the passengers and aviation related
activities such as Hospitality and Convention, Airport Business District
(Retail &Commercial) and Logistics and Warehousing to cater the growing
dynamics of Bhubaneswar Airport wherein an investment of Rs 2500 Crore has been
anticipated with direct and indirect employment generation of 35,000 and 50,000
respectively,” Mohapatra told reporters here.
The proposed development shall be taken up on PPP model for a
concession lease period of 30 years. The expression of interest for the
development plan had already been published and more than nine potential
developers have envisaged interest in the project, he added.

Modi to hit campaign trial in W Odisha on Friday