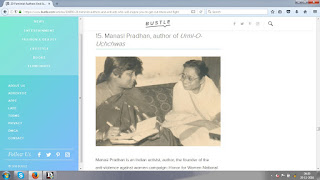 Bhubaneswar,
Nov 23: Internationally acclaimed women’s rights activist and author Manasi Pradhan
has become the first Indian to feature in the prestigious global list of
World’s Top 20 feminist author and activist compiled by America’s highest read
women magazine “Bustle”.
The
list includes seven Nobel Prize winners and several Pulitzerprize winners
including Naomi Klein, MalalaYousafzai, Angela Davis, Kate Millet, Gloria
Steinem, ShirinEbadi, RigobertaMenchu, Betty Friedan, Sheryl WuDunn and Ann
Jones.
The
book “Urmi O Uchchwas” authored by Pradhan and translated into eight major
languages has been listed by the Bustle magazine as a must read to get inspired
to get out there and fight. The New York-based Bustle magazine is widely read
across the globe with over 11 Million monthly readership.
Born
to a very poor family in a remote village of Odisha, the life story of Pradhan
and her fight against all odds has been a subject of several documentaries and
tele-series across the globe. Last month, she featured in the Women Activism
project of New York City government. She is also scheduled to be featured in
the
She
is the founder of OYSS Women and NirbhayaVahini. In 2009, she launched the
Honour for Women National Campaign, a nationwide movement to end violence
against women in India. The movement has been instrumental in galvanizing the
nation against women atrocities.
Recipient
of many prestigious awards, including Rani LakhmibaiStree Shakti Puraskar,
‘Outstanding Women Award’ for 2011 along with Mary Pierick, she will be
conferred with the “Peace Award” by Global Peace Initiative on November 25.
Pradhan
has served as a Member of the National Commission for Women and India’s Central
Film Censor Board.