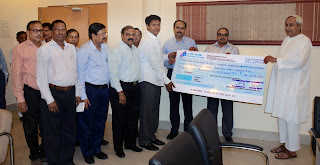 Bhubaneswar, Nov 29: The Odisha Power Generation Corporation
Ltd (OPGC) on Tuesday handed over a cheque of Rs 15 crore to Chief Minister Naveen
Patnaik towards the State’s share of dividend for the year 2015-16.
The cheque was handed over to the Chief Minister at the State
Secretariat by Energy Minister Pranab Prakash Das in the presence of department
Principal Secretary and OPGC Chairman Rajesh Verma, OPGC Managing Director Indranil
Dutta and Director (Finance) HP Nayak.
As per dividend policy of the company, 25% of the profit of
the year 2015-16 corresponding to 6% of the paid up share capital has been
declared as interim dividend. This interim dividend is likely to be confirmed
as final dividend as learnt from the sources of the company.
It is worthwhile to mention here that OPGC is expanding the
capacity of its power plant with a capital outlay of Rs 11,547 crore by setting
up of 2 units of 660MW capacity each at Ib Thermal Power station, Banharpalli,
Jharsuguda which are under construction. Since the major portion of the profit
is being utilized for financing the expansion project the company has adopted a
conservative policy of distributing 25% of its distributable profit as dividend
until the new units go in to commercial operation.
The same units are scheduled to be commissioned towards the
end of the financial year 2017-18.