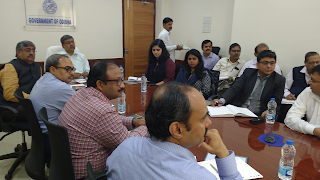 Bhubaneswar, Nov 30: The Odisha Government has initiated a
collaborative partnership with the University of Chicago, India Centre on
energy and environmental issues.
A high-level meeting in this regard was held under the chairmanship
of Chief Secretary Aditya Prasad Padhi at the State Secretariat here on
Wednesday wherein an expert group from the university made a presentation on
the possibilities of collaboration.
Considering the proposals and views of the expert group, the Chief
Secretary Padhi advised to start intellectual collaborations on energy and
environmental issues. He said, “The Government is working on pollution control
and energy saving measures for some years. We would like to have an independent
study of the approaches adopted so far by the State and bring in international
practices for making those more effective at the field level.”
Replying to a media query, Development Commissioner R
Balakrishnan said, “We have had an engagement with Chicago University through
the Odisha Knowledge Hub (OKH) programmes. Now, we are holding preliminary
talks with the India Centre of the university. The State will like to gain from
their worldwide knowledge and expertise on monitoring of pollution control and
improving energy efficiency in the State.”
He added, “The areas of collaboration in the matters of
training and capacity building are also being explored with the team.”
Country Director of Energy Policy Institute at Chicago
(EPIC), India Anant Sudarshan said “The objective of EPIC is to bring economic
research to the forefront of solving energy and environment challenges.
Presently, we are working with Government of India and various States in the
reducing electric theft, increasing energy efficiency, emissions trading to control
industrial air pollution, water quality monitoring, exploring new decentralised
opportunities, crop burning, electricity reform, access to electricity and its
distribution, etc.
The Government of Odisha has taken a lot of initiatives from
their side in these matters. The State has taken a number of steps for
pollution monitoring and accessing renewable energy, he said, adding that the
EPIC would like to “have collaboration with the State Government and the
Pollution Control Board to bring about qualitative as well as quantitative
improvements in these initiatives of the State Government.
It was decided at the meeting that the expert team would hold
further discussions with the Department of Energy, the GRIDCO and the Pollution
Control Board to identify specific areas of collaboration.
Energy Principal Secretary Rajesh Kumar Verma, GRIDCO CMD
Hemant Kumar Sharma, Pollution Control Board Member Debidatta Biswal along with
the representatives from various DISCOMs and senior officers participated in the
deliberations. The four- member expert team was led by Programme Manager of
Tata Centre for Development at Chicago Cheistha Kochhar.