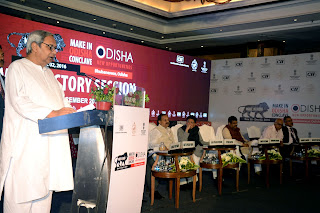 Bhubaneswar, Dec 2: The total investment intent received by
the State as a lead up to the Make in Odisha conclave and during the event this
year is to the tune of Rs 2,03,270 crore, said Chief Minister Naveen Patnaik at
the valedictory session of the three-day strategic investment event on Friday.
“More importantly for the State, these proposed investments
have the potential to generate 1.40 lakh additional jobs for the people of our
State,” said Patnaik.
He said the State has received investment intent in 10
diversified sectors.
He said the State Government has decided to set up a special
institutional mechanism to ensure grounding of these investments in the
shortest possible time.
“The State Government is partnering with National Aluminium
Company, NALCO, for setting up a world-class aluminum park at Angul and with
Indian Oil Corporation, IOCL, for the development of Plastics Park and the
larger PCPIR at Paradip,” said Patnaik.
Having witnessed tremendous response to the conclave, the
Chief Minister announced to organise this conclave biannually as a stepping
stone towards realizing our Vision 2025 for the industrial development in the
State. The next version of Make in Odisha conclave will be held in 2018.