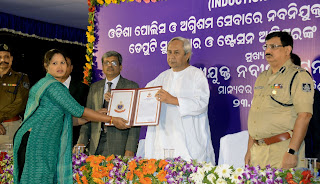 Bhubaneswar, Dec 23: As many as 840 officers were recruited
in police and fire services departments on Friday.
The newly recruited officers include 792 Sub-Inspectors, Sergeants
and Deputy Subedars of Odisha Police and 48 Station Officers of Fire Services.
“They will play a crucial role in maintenance of law and
order, crime control as well as delivering emergency public services at the
grassroots. Reiterating my commitment to employment generation, I called upon
the newly recruited officers to dedicate themselves to the cause of public,”
said Chief Minister Naveen Patnaik.
The CM asked the newly recruited officers to be highly
proactive, sensitive and responsive in redressing the grievances of women,
children, senior citizens, scheduled castes, scheduled tribes and other
backward and marginal sections of the society.
“The officers have to equip themselves with high-level skills
and knowledge for handling cyber crime, economic offences and other white
collar crime as well as extremism. The Fire officers will have to deal with
fire hazards and many other emergency situations,” hoped Patnaik.