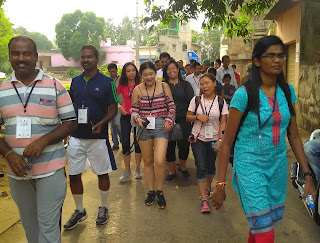 Bhubaneswar, Apr 30: At a time when Air Asia has started
linking the Temple City with a prominent airway gateway of the East, Kuala
Lumpur, and Bhubaneswar is hoping to draw more and more tourists from the
Buddhist world, an 11-member team from Malaysia comprising staff of the
airlines and media representatives, joined the 20th Ekamra Walks on Sunday and
soaked themselves with the beauty of the old world Kalingan architecture,
traditional lifestyle of Old Town and experienced the lucid and rhythmic ways of
Classical Odissi dance.
The visit of the small group hold immense potential as the
new air-link has once again revived the once prosperous sea route between the
ancient Kalinga and the Eastern Asian island nations. In fact, Indonesia and
Malayasia had an ancient cultural link with the Indian mainland and especially
the land of Kalinga, from where, Buddhism flourished and entered the Eastern
Asian territory after the infamous Kalinga War, which changed the blood-thirsty
Emperor Ashoka to Dharmashoka or the messiah of principles. 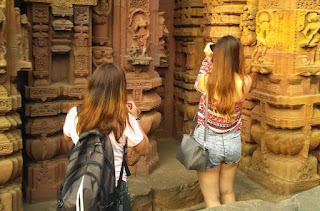 The Malayasian team and other members of the Ekamra Walks,
totaling 35 visited monuments like Mukteswar with its Buddhist-Hinduism
synthesis in architecture and concept, its famous and unique arch, 7th Century
beautiful and intact temple Parsurameswar, 7th Century Sampurnajaleswar,
15-16th Century Kotitirtheswar, ancient lake Bindusagar, 12-13th Century Ananta
Vasudev Temple, 13th Century Brahma temple, Old Dharmasala, 11th Century
Lingaraj Temple, 12-13th Century Sari Temple, Mohini Temple and the Parikrama
along the Bindusagar lake, Odissi recital at Art Vision, the institute run by
eminent Odissi dancer Ileana Citaristi and the medicinal plan garden Ekamra
Van.
Qastury team leader of the delegation and a staff from Air
Asia termed her experience of Ekamra Walks as interesting and enriching.
Danny, also from Air Asia, said, “The experience is fine.
The explanations at the monuments could be in more detailed format to engage
the walkers.”
Among others, Director Tourism Nitin Bhanudas Jawle was
present at the walks and also explained some points and clarified doubts of the
Malayasian guests. The Malayasian delegation is currently visiting various
tourism destinations in and around the State Capital.
On Saturday the delegation went to Ratnagiri, Lalitgiri,
Udayagiri and Langudi, the Diamond Triangle of Buddhist heritage sites. After
the Ekamra Walks on Yesterday, they went to Chilika to have a look at the
largest brackish water lake of Asia, which is famous for its Irrawaddy dolphins,
migratory birds and biodiversity.