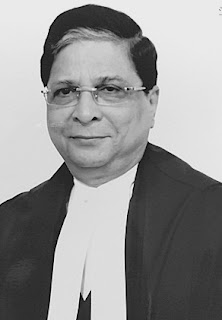 Bhubaneswar, July 26: Justice Dipak Misra is all set to be
the next Chief Justice of India (CJI). Incumbent CJI Justice Jagdish Singh
Khehar has named Justice Misra as his successor. Misra is the second senior
most judge as the Supreme Court after the CJI.
As per the laid down procedure, the Union Law Minister
writes to the CJI seeking his recommendation on who should succeed him. The
incumbent CJI Justice Khehar while complying with such a procedure recommended
the name of Justice Misra thereby setting the ball rolling for the appointment
of the next CJI.
Justice Misra (63) will retire on October 2, 2018. He will be
the third Odia after Justice Ranganath Misra and GB Patnaik to occupy the top
post in the Indian judiciary.
Born on October 3, 1953 Justice Dipak Misra was enrolled as
an Advocate on February, 14 1977 and practiced in Constitutional, civil,
criminal, revenue, service and sales tax matters in the Orissa High Court and
the service tribunal. He was appointed as an additional Judge of the Orissa
High Court on January 17, 1996 and transferred to the Madhya Pradesh High Court
on March 3, 1997.
He became permanent Judge on December 19 1997. Justice Misra
assumed charge of the office of Chief Justice, Patna High Court on December 23,
2009 and charge of the office of the Chief Justice of Delhi High Court on May
24, 2010. He was elevated as a Judge, Supreme Court on October 10, 2011.

Death of engg students: Court asks Govt to give Rs 25L to each victim’s kin

Jharsuguda Airport to be fully functional by May, 2018