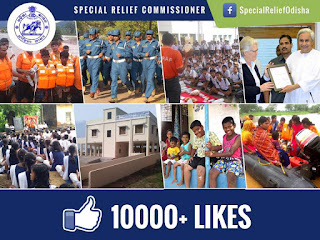 Bhubaneswar, Aug 2: Special Relief Commissioner’s (SRC) official
Facebook page crossed 10,000 followers on Wednesday.
It was around one-and-a-half month ago that the SRC had
joined the social media by registering its presence on Facebook.
“Chief Minister Naveen Patnaik has issued clear instructions
for use of three Ts namely, Technology, Transparency and Team Work in the
matter of Governance. In pursuance to his kind instructions to use social media
to connect with public, the office of Special Relief Commissioner started a
facebook page on June 20 this year. Today on Wednesday the page has got 10, 000
likes,” said Special Relief Commissioner (SRC) Bishnupada Sethi.
During the period the page reached to over 15 lakh people and
the engagement was with over three lakh of them. The video posted on the page
has been viewed by over a lakh people, Sethi said.
While 92 percent of its 10,000 followers are male eight percent
are women, added Sethi.
While highest 5,759 people who follow the page are from
Bhubaneswar, large number of people from different districts and outside from
cities like Kolkata, Delhi and foreign countries like the USA and UK are
following the page to receive disaster related update.
Those who are following from other
cities of the state include from Cuttack (286), Berhampur (159) Rourkela (114),
Rayagada (100), Sambalpur (63), Balasore (54) , Puri (52), Jagatsinghpur (41),
Bhadrak (41), Bhawanipatna (33), Keonjhar (27), Baripada (27), Talcher (26),
Jharsuguda (25), Bargarh (25), Angul (24), Kendrapara (20), Balangir (20),
Junagarh (20), Dhenkanal (19), and Koraput (17).
Among the men who followed the page 27 percent fans are
between the age group of 13-17, 37 percent between 18-24 years and 19 percent
between the age group of 25-34 year. Among women, three percent are between the
age group of 13-17, 2 percent between the age group of 18-24 years of age.
“It has been our efforts to connect with all the facebook
users who are either staying in Odisha or have some interest in the matter
relating to the State,” said the SRC.
Over the years, Disaster Management Organisation in the state
has become more robust with preparations, starting at the community level.
Disaster Management requires frequent drills and constant feedback from the
citizens.
During the month of July, Odisha faced flood in several
districts. The work done by the administration in providing rescue and relief
to the affected persons has been appreciated at large.
Use of WhatsApp and facebook was tested quite successfully
during the flood times which have also been appreciated nationally.
The feedbacks from public have encouraged my colleagues who
have risen to the call of duty.