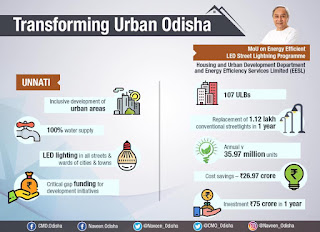 Bhubaneswar, Aug 3: Chief Minister Naveen Patnaik on Thursday
launched UNNATI, a new initiative of the State Government, which aims at
transformation of cities and towns into thriving urban areas.
“The programme will accelerate implementation of civic
amenities across all 107 municipalities and NACs of our state. The cities and
towns will have 100% water supply and LED street lighting in all streets and
wards,” said Chief Minister in a function in the State Secretariat.
He said that the LED street lighting project will go
underway across all urban local bodies in the state very soon. “This will be a
milestone in sustainable urban development by saving both energy and costs,”
said Patnaik.
Maintaining that his Government has attached high priority
to urban development, Patnaik said budget provisioning has grown 16 times since
2000-01 and due to our pro-people initiatives, the Government ensured sharpest
decline in urban poverty from 37.6% in 2004-05 to 17.3% in 2011-12.

Four youths nabbed while planning to commit robbery in Odisha