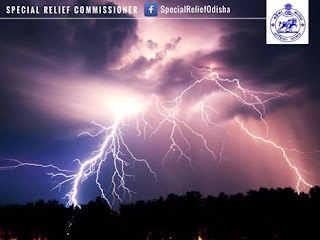 Bhubaneswar, Aug 8, 2017: Odisha constitutes 20 per cent of the total
death caused due to lightning strikes in the country. About 2,000 people lose
their lives every year in India due to lightning while as many as 258 persons
have already died due to the lightning strikes in last five months.
This was revealed at a meeting chaired by Revenue and
Disaster Management Minister Maheswar Mohanty to discuss about enhancing
awareness on lightning safety in the State to save the lives of human and
animals from this killer disaster.
Alarmed over this statistics, the State Government on Tuesday
decided to set up an expert committee to ascertain the reason behind lightning
incidents and subsequent rise in casualties.
“About 2,000 people lose their lives every year in India due
to lightning. Such death in Odisha is around 400 every year which constitute
20% of the total death in the country,” said Special Relief Commissioner (SRC)
Bishnupada Sethi, who attended the meeting.
The meeting focused on massive awareness among the people about
the lightning safety tips to reduce this rate of casualty.
Director, IMD, Bhubaneswar Sarat Chandra Sahu through a power
point presentation explained about the causes of the thunderstorm and safety
tips for lightning hazard.
The SRC indicated about the death toll in the state during
last five years and initiatives taken to reduce the lightning death through
public awareness.
Development Commissioner and Additional Chief Secretary R
Balkrishnan advised the concerned officials to make an analysis of lightning
deaths occurring in our State to identify the areas and class of people highly
vulnerable to thunderstorm/ lightning.
The departments of Agriculture and FE, Panchayati Raj and
Drinking Water, Forest and Environment, School and Mass Education, Higher
Education, Labour and ESI, Energy, W&CD and Mission Shakti, H&UD were
asked to undertake awareness campaign on lightning safety through their field
functionaries.
Awareness posters and other IEC materials shall be developed
by OSDMA with the help of the concerned depts. for targeted population
concerning such Departments.
It was decided to ensure massive awareness campaign on
lightning safety shall be taken up through electronic and print media.
Among others, Chandra Sekhar Kumar, Principal Secretary,
Revenue and DM Department, and senior officers of line departments were present
in the meeting.