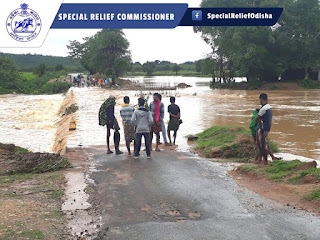 Bhubaneswar, Aug 9, 2017: With the flash floods leaving a
trail of destruction in southern Odisha, the State Government on Wednesday pegged
the damage at Rs 218.72 crore.
The southern districts of Rayagada, Kalahandi, Malkangiri,
Nawarangpur and Koraput were severely affected due to heavy rain and floods in
river Nagavali, Kalyani, Indravati, Turi, Bhaskel, Bangeri, Hati, and other
river systems between July 15 and July 19.
Rayagada district, especially its two Scheduled Tribe
dominated Kalyansinghpur and Sadar blocks, was the worst affected due to flood
in the Nagavali and Kalyani.
“Based on the reports received from different departments and
the affected districts, the financial loss caused by these floods has been
estimated at Rs 218.72 crore,” said a Special Relief Commissioner (SRC) communiqué.
The report on damages on account of floods/ heavy rain was
sent to the Union Ministry of Home Affairs on Wednesday, it added.
The Central Government has also been requested to take
expeditious steps for restoration of the damaged railway bridges (one near
Kartikguda and another between Therubali and Singapur RD stations) and tracks,
damaged national highways and the telecom lines.
The disaster severely affected the lives and private as well
as public properties in the affected districts. About 1.82 lakh people in 528
villages of 33 blocks of these five districts were affected by these floods.
Though there was no human casualty directly on account of
flood, two people died in Kalahandi due to landslide and another in Malkangiri
due to wall collapse.
Notably, there was no human casualty in the worst affected
Rayagada district due to proactive steps of the State Government.
As per preliminary assessment, as many as 5136 private houses
have been damaged.
Similarly, the flood water has badly affected 23,991 hectare
of agriculture land including 169.6 ha of paddy nursery area, 21,978 ha of paddy
area and 2,013ha of non-paddy area.
Agriculture land to the extent of 110.66 ha has been sand
cast in Nawarangpur. At least 28 fishing net and seven boats have been damaged in
Kalahandi.
Massive damage has been caused to public properties like
canals, river embankments, roads, bridges, culverts, drains, water works, tube
wells, lift irrigation points, electrical installations, telecommunications
infrastructure and government buildings, the SRC release added.
As many as 116 PWD roads measuring 597.125 km have been
damaged. Also, 160 CD works on PWD roads have been damaged and 31 breaches have
occurred on PWD roads. Similarly rural roads measuring 128.320 km have been
badly damaged. As many as 71 breaches have occurred in rural roads, 66 CD works
have been damaged and seven CDs have been washed away, it added.
Due to floods and heavy rain, properties/ infrastructure of
residential schools under SSD, roads, water supply, drainage, electricity,
plantations have been badly damaged 96 utilities have been damaged. Six LAC
building have been damaged.
As many as 83 Anganwadi Centres, 84 Primary and Upper Primary
Schools and 38 High Schools have been damaged due to floods in Rayagada and
Kalahandi while a total of 372 lift irrigation points of Kalahandi have been
damaged due to flood water, it stated.