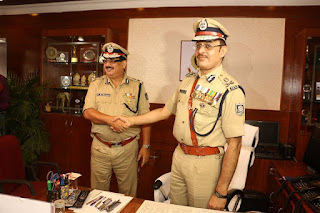 Bhubaneswar, August 31, 2017: Dr Rajendra Prasad Shamra, an IPS Officer of 1986 batch,  assumed the office of Director
General of Police (DGP) on Thursday. He took the charge from his predecessor KB
Singh in a ceremony at the State Police Headquarters in Cuttack.
After assuming
the office, Dr Sharma said it was a challenging task for him and he would try
to give his best. A native of Ajamer in Rajastan, Dr Sharma worked successfully
in various capacities of State police like Vigilance Director, Bhubaneswar-Cuttack
Commissioner of Police.
Senior officers
of State Police and staff of the Police Headquarters were present during this
assumption of charge.
A ceremonial
farewell was also given to the outgoing DGP KB Singh.
The State
Government on Friday named 1986-batch IPS officer Dr Rajendra Prasad Sharma the
new the DGP. Prior to his
new assignment, Sharma was serving as the Vigilance Director. Sharma has also
served as the Bhubaneswar-Cuttack Commissioner of Police and also in National
Security Guard (NSG) as the IG.
KB Singh was
sent to Odisha State Road Transport Corporation as the Chief Managing Director
(CMD) while 1986-batch officer and Crime Branch Special DG BK Shamra, who was a
strong contender for the top post in the State police administration, was
posted as the DG (Prisons) in the reshuffle.
The OSRTC
and Prisons are considered dumping grounds for officials out of favour with the
Government.
Additional
DG Arun Ray of 1988 batch has been attached with the Police Headquarters in
Cuttack while 1991 batch officer Debasis Panigrahi would continue as the ADG
Vigilance.