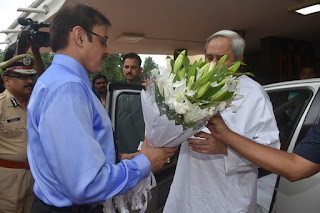 Bhubaneswar,
August 30, 2017: The State Government on Friday named 1986-batch Indian Police
Service (IPS) officer Dr Rajendra Prasad Sharma the new Director General of
Police (DGP) in place of the incumbent 1985-batch officer KB Singh.
Prior to his new assignment, Sharma was serving as the Vigilance Director. Sharma has also served as the Bhubaneswar-Cuttack Commissioner of Police and also in National Security Guard (NSG) as the IG.
KB
Singh was sent to Odisha State Road Transport Corporation as the Chief Managing
Director (CMD) while 1986-batch officer and Crime Branch Special DG BK Shamra,
who was a strong contender for the top post in the State police administration,
was posted as the DG (Prisons) in the reshuffle.
The
OSRTC and Prisons are considered dumping grounds for officials out of favour
with the Government.
Additional
DG Arun Ray of 1988 batch has been attached with the Police Headquarters in Cuttack
while 1991 batch officer Debasis Panigrahi would continue as the AFG Vigilance.

Plantation along Mahanadi river from next year in Odisha