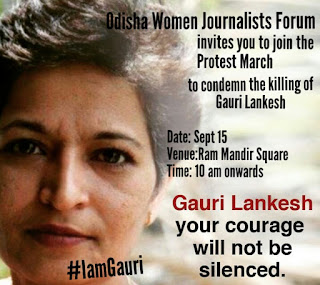 Bhubaneswar, September 13, 2017: The Odisha Women Journalists’
Forum (OWJF) will hold a protest march on Friday in Bhubaneswar to condemn the brutal
murder of senior Kannada journalist and activist, Gauri Lankesh, who was shot
dead outside her house in Bengaluru on September 5.
A protest march by the women journalists will be held at the
Ram Mandir Square on September 15 marking the eleventh day of her death.
Lankesh was the editor of Gauri Lankesh Patrike, a weekly
Kannada tabloid magazine. She was 55-years old. She was also a well-known
critic of the Sangh Parivar.
The journalists said that it’s high time that journalists
come together and raise their voice against the successive incidents of
silencing the voice of the media either by killing scribes or threatening.

Mahanadi water yield has decreased by 10% in recent decades: Report