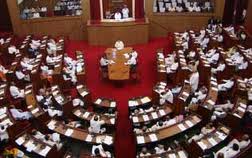 Bhubaneswar, September 13, 2017: The State Cabinet on
Wednesday approved hike in salary and allowances of Assembly Speaker, Chief
Minister, Leader of Opposition (LoP), Ministers, Deputy Speaker, Government
Chief Whip and Deputy Chief Whip and MLAs.
The MLAs last got a pay hike in 2011 when the monthly package
was hiked three-fold from Rs 21,950 per month to Rs 60,000. Before that the
salary was revised in 2003.
The decision came a few days after the Government implemented
the 7th Pay Commission recommendations for its employees, both in-service and
pensioners.
As per the decision of the Cabinet meeting chaired by Chief Minister Naveen Patnaik, the Chief Minister will now draw an
enhanced Rs 98,000 towards salary and allowances per month while Assembly
Speaker is now entitled to Rs 97,500.
Assembly Deputy Speaker will get Rs 95,000 while Leader of
Opposition (LoP) will receive Rs 97,000 followed by Cabinet rank Minister (Rs
97,500), State rank Minister (95,000), Government Chief Whip (Rs 97,000) while
Deputy Government Chief Whip (Rs 93,000) towards salary and allowances per
month.
MLAs will now draw Rs 93,000 towards salary and allowances
per month.
Earlier in the day on Wednesday, MLAs cutting across party
lines met Chief Minister Naveen Patnaik at his chamber in the Assembly and
demanded hike in their salary, allowances and MLALAD amount from Rs 1 crore to
Rs 2 crore per annum.