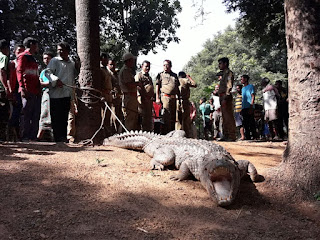 Malkangiri, November 1, 2017: Two children miraculously
escaped from attack of a crocodile even as the 12-feet reptile entered their
house in Munusa village under Hindrimal panchayat in Malkangiri district late on
Tuesday night. 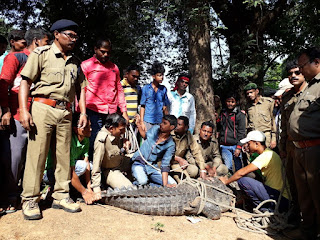 According to reports, the crocodile entered inside the house
of one Dasirathi Padiami while he and his wife were asleep along with their two
minor daughters. They woke up after hearing some sound and marked the crocodile
entering into the house and raised an alarm.
Hearing the screams, neighbours rushed to the house and
managed save the couple and their two kids and caught the crocodile with help
of sticks and ropes. They have tied the reptile to a big tree and informed the
forest officials.
The crocodile might have strayed into the house from Satiguda
dam located near the village.
On being informed, Forest officials rushed to the spot and
managed to persuade villagers not to do any harm to the animal. Till last
reports came in, a discussion was going on between the forest officials and
villagers where to release the reptile as some locals are protesting the decision
to release the animal to nearby Satiguda Dam fearing further attack.