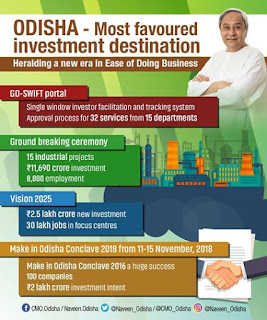 Bhubaneswar,
November 16, 2017: Chief Minister Naveen Patnaik on Thursday launched ‘GO SWIFT’
portal, new single window investor facilitation and tracking website to
facilitate ease of doing business in Odisha.
“GO SWIFT will
be a model in the country in facilitating ease of doing business. For the first
time, all 32 approvals and clearances from 15 departments will be provided
online and from this single platform,” said Patnaik while gracing the 75th
meeting of State-level Single Window Clearance Authority.
The Single
Window Clearance System in the State categorises the proposed projects into
three groups based on the total investment proposed. An investor with a
proposed investment of less than Rs. 50 crore (US$ 8 million) approaches the
respective DIC, which acts as the nodal agency for all further approval and
clearance process. The project is considered for clearances by the District-level
Single Window Clearance Authority (DLSWA).
The State
established Single Window Clearance mechanism in pursuance of the Odisha
Industries (Facilitation) Act 2004 for providing time bound clearances and
approvals.
“Odisha is
continuously breaking new grounds to bolster its position as a top investment
destination in the country and a leader in ensuring Ease of Doing Business for
investors,” said Patnaik.
The CM also
dedicated 15 industrial projects through videoconferencing for which ground
breaking ceremony was held. These projects are being implemented at an
investment of Rs 11,690
crore and will provide employment to over 8,800 people.
Chief Secretary Aditya Prasad Padhi, Development Commissioner R Balkrishnan, Finance Secretary TK Pandey was present.

Better health infrastructure in grassroots level by 2017 in Odisha