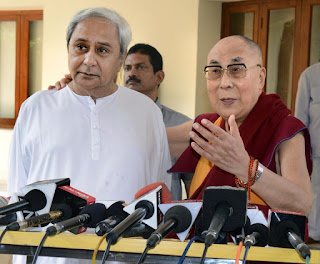 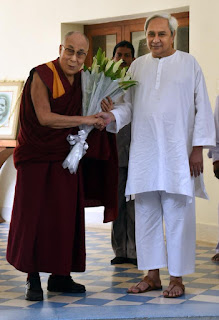 The Dalai Lama said that he admired the Chief Minister a lot.
“People’s trust, respect has won him (Naveen Patnaik)
repeatedly. He is one of the longest serving Chief Ministers and I admire him,”
said the spiritual leader after meeting with the CM at the latter’s residence. The
meeting between the dup lasted for 25 minutes.
Biju Janata Dal president Naveen Patnaik, scripted history by
becoming Odisha Chief Minister for the fourth time in a row. Patnaik, who broke
the record of his legendary father Biju Patnaik, also crossed milestones set by
other State leaders like Dr Harekrushna Mahatab and Janaki Ballav Patnaik.
Soon after reaching at the Biju Patnaik International Airport
(BPIA) at 1.10 pm, the 82-year-old Buddhist monk drove to Naveen Niwas, the
residence of the Chief Minister.
“It was courtesy call.
I am honoured that his Holiness Dali Lama is visiting Odisha, and, it is the
second time that I met him as Chief Minister of the State,” said the four-time
Chief Minister.
The Dalai Lama arrived in Bhubaneswar amid rousing welcome by
hundreds of people to the spiritual leader. Tourism and Culture Minister Ashok
Panda and Food Supplies and Consumer Welfare Minister Surya Narayan Patro
welcomed the spiritual leader at the airport on behalf of the Odisha
Government.
A large number of devotees who had also come from far-flung
areas to catch a glimpse of their beloved leader whom they consider as their
“living God” thronged the airport.
“I feel great honour once again in Odisha. Today’s world is
full of crises. Good health needs no medicine, but peace of mind. China needs
India and India needs China. They should live peacefully helping each other.
Modern people should pay more attention to learn ancient knowledge,” the Dalai
Lama said.
During his three-day tour of the State, the spiritual leader
will attend a programme of KIIS and also inaugurate a newly-constructed
Buddhist monastery in at Chandragiri Gajapati district. The Dalai Lama would
fly to the Chandragiri Tibetan settlement by a chopper to unveil the
five-storied monastery named ‘Padma Sambhav Mahavira’.
Elaborate security arrangements have been made for the
Tibetan exiled leader for visit to Odisha.