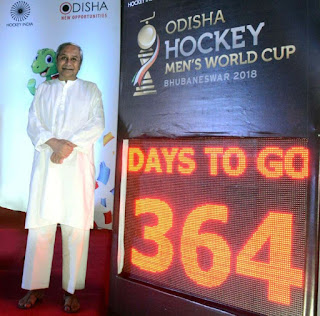 Bhubaneswar, November 29, 2017: The countdown has begun for
the for Odisha Hockey Men’s World Cup-2018 with Chief Minister Naveen Patnaik
launching logo for the ensuing event to be held at Kalinga Stadium between November
28 to December 16 next year in Bhubaneswar, the capital city of Odisha on Wednesday. 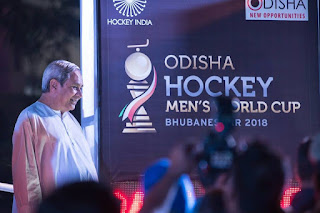 “I was happy to launch the logo and countdown for Odisha Hockey
Men’s World Cup 2018 that will be held in our Capital city from 28 November to
16 December next year. With Hockey World League starting from 1 December,
Odisha will hold centrestage in global hockey through 2018 to the conduct of
World Cup here. With best teams and players on the turf, we are going to
witness world class hockey on our soil. Like all of you, I am also waiting for
the finest hockey feast in its cradle,” said the Chief Minister after releasing
the logo at ain a function at the Kalinga Stadium.
The Men’s Hockey World League Final, involving eight of world’s
best teams, including hosts India, will be played between December 1-10, 2017
while the World Cup is scheduled between November 28 and December 16 in 2018. It
will see 15 teams join the hosts at the event.
Meanwhile, preparations are in full swing for the Odisha Men’s
Hockey World League-2017 finals to be held at the Kalinga Stadium between
December 1 and 10.
“In two days, eight best nations of world hockey will clash
for the championship title at Odisha Men’s Hockey World League 2017 finals
here. In less than a year, the world will assemble on our soil for the Odisha
Hockey Men’s World Cup, the planet’s top most hockey event. Odisha has stamped
a position of prominence as a global sports destination,” said Patnaik.