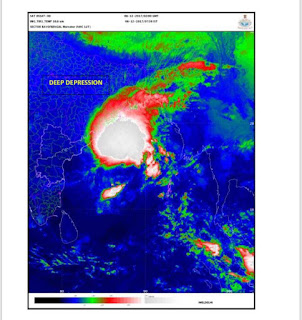 Bhubaneswar, December 8, 2017: India Meteorological
Department (IMD) predicted heavy to very heavy rainfall over Odisha on Saturday
and Sunday under the influence of a deep depression over central Bay of Bengal.
The depression over southeast and adjoining central
Bay of Bengal moved further north-northwestwards with a speed of about 20 kmph
during past six hours and intensified into a deep depression and lay centred over
central Bay of Bengal about 590 km south- southeast of Gopalpur and 660 km
east-southeast of Machilipatnam, said an IMD release.
It said that it will likely maintain intensity of deep
depression for about 12 hours and weaken gradually into a depression during
subsequent 12 hours. The system is very likely to move north-northwestwards and
reach north Andhra Pradesh and south Odisha coasts around Saturday morning as a
depression.