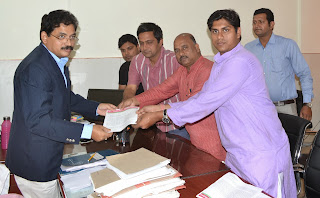 Bhubaneswar: Accusing the ruling BJD of failing to create jobs,
the SP State unit on Saturday staged a demonstration in front of the office of
the Employment Mission Director here demanding employment and provision of
unemployment allowance to unemployed youth.
“The
State Government during 2005-06 introduced an employment mission with an aim to
provide jobs to 1 lakh youth annually and self employment to 5 lakh youth. Since
last eight years, though 10,83,722 lakh youth have registered their names with
Employment exchange, the Government was able to provide jobs to only 6,000
youth,” said SP State unit president Rabi Behera.
Earlier
on Friday, the party along with cyclone Phailin and flood hit farmers coming
from Ganjam, Balasore, Kendrapara, Jagatsinghpur and Nayagarh took out a
massive rally in front of the State Assembly demanding adequate compensation
and Government supports to calamity hit farmers.
“We
demand opening of paddy yards (Mandis) in all 30 districts of the State,
besides a bonus of Rs 200 per quintal of paddy,” said Behera.
Free
seeds, fertilisers and pesticides to farmers should be taken up on a war
footing for the Rabi crop, besides interest free loans to affected farmers,
Behera demanded.