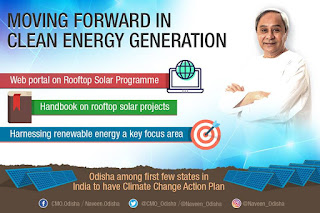 Bhubaneswar, August 23, 2017: Chief Minister Naveen Patnaik on
Wednesday launched the web portal of grid connected Rooftop Solar programme in
the State. The website www.rtsodisha.gov.in was aimed at making the programme
easily accessible to the common citizens with 30 percent Government
subsidy.
Patnaik restated focus on harnessing renewable energy and
utlising it productively in various spheres of economy.
“Odisha is one of the first few States to prepare its Climate
Change Action Plan. Grid connected rooftop solar systems are best options for
adding renewable solar capacity. These decentralized systems strengthen the
grid, reduce losses and benefit public,” said Patnaik.
A handbook was also launched on the occasion. He hoped that
establishment of rooftop solar systems through net metering will be
well-accepted by the public and wished the initiative all success.
As per data available, the rooftop potential in Odisha has
been estimated at 5,000 MW.  For the
current year a target of 8 MW has been fixed of which 4MW has been exclusively
assigned to Bhubaneswar solar city.
The grid connected roof top programme is primarily meant for
consumers of utility power. The
consumers  can  install
small  solar  plants  on their
rooftops   and consume  the
generated   solar  power
during  day time.   Excess power if any, can be exported to the
grid at 220V/440V levels through their service cables.  The exported power is metered on a special
type of meter call Net-Meter which is provided by the respective power
distribution companies.
The positive difference of import from the grid and export to
the grid is billed to the consumer. In this manner the consumer can reduce his
consumption of utility power by using his own solar power   and simultaneously can get a reduced bill on
account of export of solar power to the grid.
To support the renewable energy initiatives, the State
Government announced Odisha Renewable Energy Policy in November 2016. The
policy envisages renewable energy capacity addition 2700MW by 2022.  A major part of this capacity addition target
has been assigned to solar with a share of 2200 MW. This capacity includes land
base projects, canal based projects, grid connected rooftop projects as well as
off-grid solar projects, said a Chief Minister’s Office (CMO) statement.
So far a total capacity of 68 MW has been commissioned in the
State.  To further facilitate   land based solar parks are being created in
suitable locations in the state. Besides, the policy provides different
incentives and enabling environment for the same.

Rumours are being spread about FRDI Bill: PM Modi