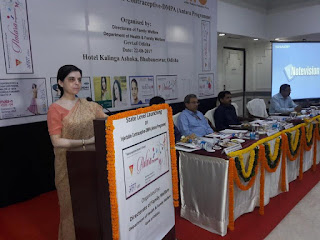 Bhubaneswar, August 22, 2017: Odisha Government on
Tuesday launched Injectable Contraceptive programme, aimed to maintain healthy
gap between the births of children by using injectable contraceptive. The
injections would be available for free at public health facilities.
Health and Family Welfare Secretary PK Meherda launched the
programme christened as ‘Antara’ which is considered to be effective and
convenient, with an aim to strengthen the family planning programme in the
State.
By introducing another option among the family planning
measures in the form of injectable contraceptive at Government-run healthcare
facilities, the State would witness further reduction in the maternal mortality
rate and infant mortality rate.
“The injectable contraceptive system is tested and tried as
a very safe method of family planning. It is in use in more than 130 countries
around the world,” said Meherda.
The injectable contraceptive is supposed to be used within a
week from the day a woman’s menstrual cycle begins. Currently, injections are
available for free at public health facilities, said Family Welfare Director Dr
Binod Kumar Mishra.
It has to be taken once in every three months.
United Nations Population Fund (UNFPA) is providing
technical support in rolling out the injectables in the State.
Among others present at the function were Union Ministry of
Health and Family Welfare Deputy Commissioner Dr S K Sikdar, Odisha NHM
Commissioner-cum-Mission Director Shalini Pandit.